The People You Meet when You Pay Attention

Yesterday afternoon I hung up after speaking with a Social Security rep who informed me that the paperwork that I hand delivered to my local SSA office was missing. I was livid. Because it was the end of my world? No, I realize that it is just that: a minor inconvenience, however it doesn't quite feel like it when I tell my stiff, painful joints and unsteady gait that I must make another painful trip downtown. I take a deep breath and tell myself to stop being such a pansy-ass about it and get over it. For God's sake, so many others have it so much worse than I, who am I to bitch and complain? 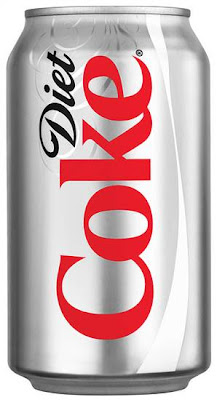 The Nectar of the Gods
The next morning I wake up and am painfully aware that I didn't sleep well the night before. I grump and begin shuffling to the fridge with swollen feet the size of Bozo shoes to fetch my YooHoo-esque protein drink that helps the immune system stay strong and a Diet Coke to swallow all my flippin' medication for the day. As I grunt and groan and move about like an arthritic 75 year old, I flop in my chair and begin swallowing protein drink, pills and Diet Coke. Once those 2 cans are empty, I wait as if a lightening bolt is going to strike me with the power and agility of a gymnast. It doesn't but at least I know I have the meds down my throat, now off to the Social Security Office to hand deliver a form for the second time. 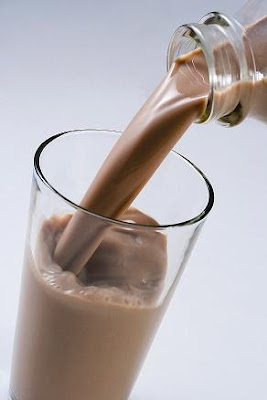 I hobble into the local office, touch a screen and rip a number from the machine and sit down. I casually survey the scads of people sitting around me. I find that even though there are plenty of younger people here along with the elderly, everyone's eyes are transfixed on nothing. Some look as though they haven't had a meal in a few days, some are lost in thought that tells me that the memory or situation is painful. People are talking in low tones and shushing their children. I look over at the Social Security Reps and see the protective hardness in their eyes as they explain for the one millionth time to their customers that they didn't receive the form or don't qualify for benefits. 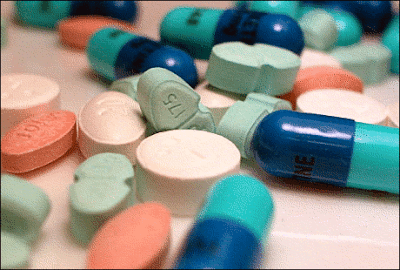 I notice a woman sitting next to me who has her head resting on her cane and finally looks up to see who is staring at her. Her temper is short and physical pain is tender to the touch. When the SSA Rep announces the next number over the loudspeaker, the continuing conversations among those waiting and the impatience of children fill the room with audible life. The woman frowns and furrows her brow and shouts a bit too loudly; I can't hear the number! What was the number they called? The crowd's conversations were evacuated and ushered out immediately for a more appropriate time to be determined by a more friendly stranger. 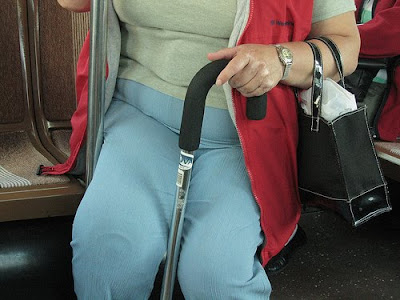 The cross woman was oblivious to her rudeness and continued to stand, walk, sit and change position in order to find a more comfortable position. Her number was called and I watched her hobble to the window. Her irritation was apparent and the SSA rep's defenses were held firmly in place as a shield for protection against customers such as these. After her business was complete, she shuffled her feet toward the door and eased herself into the car for the trip home.
I shook my head and told myself, I hope I never get like that. But, at the same time, I remember when my grandmother would be in such pain from her ailments and became uncharacteristically irritated and even at times, angry without provocation. At the time, I remember watching store clerks become visibly upset or taken aback at her behavior not knowing why she was behaving as harshly as she was. My thoughts brought me back to present day and I watched the woman pull away from SSA in her car and saw her face rumpled in pain.
Pain can be an ugly creature to contend with and to watch others suffer from.
Somehow, I came to meet and know my grandmother in a totally different way by observing that woman. So, I guess if you pay attention, you can understand others a bit better.
By the way, 'that woman' was me.
More Musings Later-
Posted by Another Writer at 9:43 PM

It seems that people that have these jobs were never tested to treat people with respect. No one
checks to see what their social skills. If you do not like people get out of your job..There is a line of people that do care and will try and help you the best you can.

Now let me talk about hopitals. I had to go to the emergency room yesterday and was treated like a piece of meat and I do have insurance. Everyone else there had Tenncare..People dressed with very expesive clothes, driving very expensive new clothes. the family next to me was on Tenncare because the husband that was out of work..His child got hurt and when the nurse asked where their child got hurt, the father said at his job..well, you said you were on tenncare because you had no job..The nurse did not pickup on that. If I was not in so much pain myself, I would have found out who they were an turn them in to Tenncare for fraud...
My cobra is up in two months and self employed am I gin to be excepted for Tenncare probaly not.
I say anyone that you know that that is collecting and should not be..Turn their asses in and they should be made to pay every penny back they used....
Sick and saddened to see where this world has come to and how much worse it will get..
Lots more to say but I think everyone know what I mean...No all you thiefs turn your self in and let the people that have worked their whole life and never asked anyone for anything have their turn
to collect some help if needed.