No, Charles Gibson is not my daddy. After watching him for years on GMA and now the ABC Evening News, I have always wished he was.
Why? The answer for me is easy. My own father was noticeably absent from my life growing up and so when I see doting fathers, I sometimes feel a twinge of longing. I remember one time when I was watching GMA and Diane Sawyer and Charlie (he was Charlie in the morning and Charles in the evening...go figure) were outside Times Square with the crowd. Diane asked the cameraman to get a long shot of Charley and his daughter in the crowd. It seems that she had just gotten her first important network gig and the smile and warm embrace from her Daddy spoke volumes. 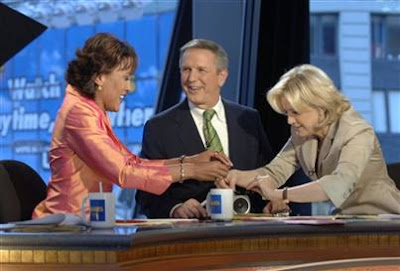 Another time, Charley was at the news desk giving facts and figures regarding the Afghanistan war, Vladimir Putin's views of the latest U.N. Treaty, and Congress's continual battles on the hill. He paused and glanced down at his notes and considered his news tone by stating:
"On the local front, I am proud to announce that my daughter has given birth to our first grandchild. Or, I should say, grandson. And, that's the news at this hour." He never broke the news tone or demeanor, but once he delivered the news, the cameraman put the camera on Charlie instead of Diane and Robin. He caught an uncharacteristically ecstatic Charlie Gibson grinning from ear to ear as they showed a picture of his grandson from just hours ago.
That was it...I dubbed him 'My Daddy'. When the nightly news appears on my screen each evening, my friends, partner and I exclaim with excitement, "Daddeeeeeeee!" 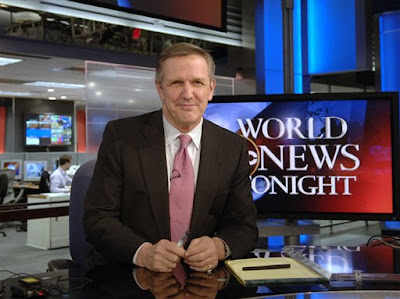 You also have to love a guy that professed his love for Julia Child on national television. Together they laughed, giggled and traded barbs as Julia cooked her French specialties on morning television. And as usual, they both would yodel the familiar "Soup de Jour!" upon completion. He wasn't afraid of acting silly...it seemed natural and fun.
And now Daddy is retiring. You'll never guess why. His daughter moved to Seattle and of course has that grandson with her. You can't separate Daddy from his beloved daughter and grandchild now can you?
I'll miss you, Daddy.
More Musings Later-
Posted by Another Writer at 9:01 AM