Recently, my sister was diagnosed with rectal cancer. It has been an extremely emotional time for her and our family and friends. She is an incredibly strong woman and I am a firm believer in "THOUGHTS BECOME THINGS, CHOOSE THE GOOD ONES."

Therefore, I created a mantra for her entitled: "You Are Healed". To read more about her journey, Click HERE. In the meantime, enjoy a morning affirmation.

Posted by Unknown at 7:29 AM No comments:

I've Got A Secret, A Ticket and a Corkboard!

Did you catch Oprah Winfrey's show yesterday? It's one of the incredible perks of being self-employed. I am up to my eyeballs in work, but I made myself stop and watch for 60 glorious minutes.

She had a panel that discussed "The Secret," the book that I have read cover to cover and believe in, with its simplistic message. The idea is to train yourself to think positive thoughts, determine what you want and then focus on it. Believe me, it's easy to get off-track on this, especially when 'life happens'. But, it takes diligence. Are you thinking or worrying right now? DON'T. Replace the thought with a positive affirmation.

I swear it works. I see some of you smirking out there....go ahead, try it!
I've Got a Ticket, Do You?
To Lisa Williams, that is! You remember her, don't you? She is the English medium that briefly had a television show on the Bravo Network.

I LOVE this woman! Not only is she the most accurate clairvoyant I've ever seen, she is so herself. My favorite part of the show was when she would walk around on a crowded street and pick people out of the crowd and give them messages from loved ones and acquaintances. The looks on those people's faces when Lisa began her reading was incredible.
She uses her gift with wisdom too. That is something that is sorely missing in alot of people these days. So, I will be seated at the Ryman Auditorium in Nashville, TN watching her work.

I'm sure that the "Mother Church of Country Music" will never be the same again. It would be interesting to hear if there are messages from performers from beyond that have stood on that very stage. Remember, more than Country Music artists have played there.

I'll let you know what she has to say that night in Nashville.

And a Corkboard
I don't have it yet, but will get it as soon as possible. This relates to the Secret, but I will put pictures, affirmations and anything else I think of that I want in my life. It will be "My Time" when I post pics or reminders on this board.

Ya know, sometimes Life can make you feel like you've been hit with a two by four, but it just makes the other times feel fabulous.
Ain't life great?
Cheers!

More Musings Later-
Posted by Unknown at 7:00 AM No comments:

I actually feel sorry for young girls these days...where are all the teen idols?
Nowadays, they fade in and out faster than most people change their underwear. Right now, I believe that 16 year old David from American Idol is it. Heck, maybe there is someone else? I just don't see the magazines or verbiage that I have come to know and love.
My #1 Teen Idol Favorite (I'm dating myself, so be kind)

Jay Osmond
The Osmond Brothers (including the deaf brothers and Marie, oh and Jimmy) 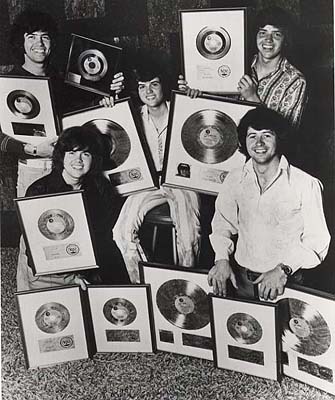 Teen Idols that I DIDN"T LIKE
Bobby Sherman - He had the weirdest smile. And, his hair looked like a helmet.
Rick Springfield - He looked like a woman back then with that hair. And, he always had a surprised look on his face. Can we say, "Deported?"
Leif Garrett - He looked like a girl to me. And, I didn't like his pictures because, well...his pants were so tight, you could tell what religion he was. Very frightening for a young, teenage girl. Have you seen him lately? I'm still frightened.
Let's see, as for magazines, I bought a BUTTLOAD of the following:
16 Magazine
Tiger Beat (my preference)

Tiger Beat special editions (focusing on one idol)
And, the verbiage I miss! What do I mean? I'll give you an example.
"David Cassidy is my FAV, COS he is so Dreamy!!!" (I know, GAG)
"The OsBros are going on tour! Be sure and order your Donny pillow case!"
The merchandising alone, these guys raked in major BUCKS
Next post, I'll do a "Where are they now?"
More Musings Later-
Posted by Unknown at 11:40 PM 3 comments: