The title above references a hodge-podge of Jewish cuisine. Had someone rattled off that menu to me years ago, this Southern Texas girl wouldn't have known what to make of it.
However, I have a Jewish spouse who regularly laments about the lack of "Jew Food" in Nashville, TN. In the land of Fried foods, starchy vegetables ladeled with a multitude of gravies and cornbread o'plenty, my poor spouse often recounts the days when her father would visit the hometown deli and order tongue sandwiches, Challah, sour pickles and other Boarhead meats always placed on rye bread. 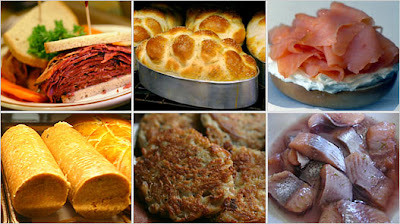 Here? How about chicken fried chicken on a lilly white piece of bread with Hellman's mayo? don't forget the cream gravy!
One of the few times I saw my partner swoon over food is when I brought her to "Noshville Deli." She ordered tongue sandwich, knish, sour pickles and a cream soda. Then, for dessert; Black and white cookies. I think I even saw a tear in her eye.
NOW: I totally get it liking the food you were raised on. And, I like alot of Jewish food. Matza is pretty good with tuna fish or chicken salad, y'all. Sour pickles are good with sandwiches, Challah and Black and Whites are really tasty as well. But let's get real: NOODLE PUDDING?
Noodle Pudding is the following: Noodles which are boiled in water, drained, put into a baking dish and combined with beaten eggs. No salt...no pepper, no cheese, no gravy....nothing. Then you bake it until the noodles on top are crunchy. My partner eats this like it is the most delicious thing she ever tasted. I've tried it, it tastes like crunchy noodles without salt or pepper. 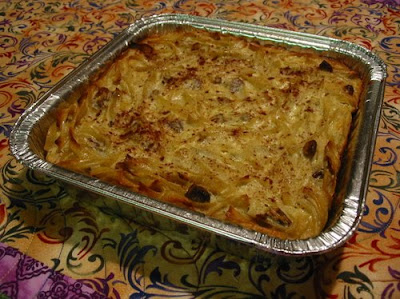 I like unusual food, but to me, some Jewish food is only good if you had a little southern trinity. The southern trinity: Cheese, onions, cream and bacon fat.
To each his own, and if you ask me; Give me Chicken Fried Steak, mashed potatoes and gravy, mac and cheese, okra with buscuits slathered in butter, honey and iced tea. It will always be my "Jew food." 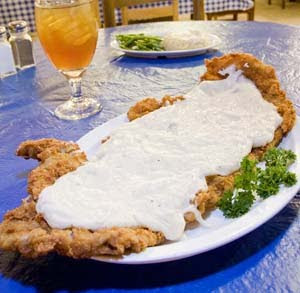 Shalom and Bless your heart,
More Musings Later-
Posted by Another Writer at 10:47 PM No comments: