Racism is Alive and Well, unfortunately.

As a 50 year old female, painfully aware of the racial tensions in America, I never thought I would see in my lifetime an African American President.  Never in a million years.  The deep south has always held onto it's stubborn racist beliefs with a vengeance.  I grew up seeing the KKK roam my town and saw cross burnings on the local news more times than I care to count.

While I'm still located in the buckle of the bible belt south, that's one of the reasons I migrated north of where I used to live.  Racism makes my skin crawl and it boggles my mind that African Americans are STILL fighting for equality.  Never mind other groups fighting for those same rights (GLBT, women, etc.) It pains me to say that moving north is not the answer.  Why? There are just as many racists living in the northeast as there are in the southwest.  The Donald Trumps of the world know that much.  I am amazed and angered that Trump continues to harass President Obama regarding his birth certificate.  Is it really the fact that he believes he is from another country other than the United States?  Of course not.  It is a carefully masked jab that a black man (or woman) does not deserve to be the President of the United States.  Consider it a "Well Bless Your Heart" dig from the north.  That phrase is usually uttered among southerners when they disapprove of a particular stance and don't want to state so emphatically. 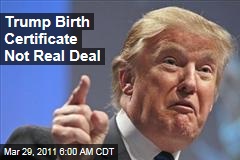 The lack of respect and continued questions regarding President Obama's birth certificate make my blood boil.  He is our president and deserves the respect.  For God's sake, as stupid as George W. Bush is, I still maintain that point.  And, he got that respect while in office.

As far as I'm concerned, Donald Trump should shut up or be willing to wear the banner he is disguising by questioning our President's birth country.  Then again, all that comes to mind is, "Bless Your Heart," Donald Trump.
urban dictionary:
More Musings Later-
Posted by Another Writer at 12:42 PM